BOOF To All The Irish Wolfhounds And Other Four-Footed Dog Creatures! 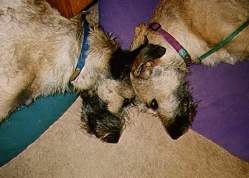 As we all know, we dogs are much wiser than humans. We told Deborah and Bill that we needed our own part of the website so that we could set forth just a few of our gems that represent the dog philosophy of life.

Please feel free to send us your own sage perspectives and we will add them to the collection.

Carina Say:
She who chases tail while on a tether ends up hogtied.
Keegan Say:
Man whose inseam (32 inches) is less than my height (37 ½ inches and growing) has many uplifting experiences when standing over me.
Fionna Say:
She who can look both like a Saint AND Clint Eastwood becomes Alpha Dog.
Tulia Say:
She who gooses last gets the last laugh.
Becka Say:
Be careful who you pick on around here this week, because they will be twice as big as you next week.

Finn: While it is fun to chase cats you must remember the catflap is not big enough to allow you to follow the cat inside, and the resultant crash is suprisingly loud.
Reilly: He who sucks cats gets a scratched muzzle and ends up with a VERY annoyed, frowning cat!
Finn: He who falls asleep on the couch with their feet against the couch back and their spine along the front edge of the couch must remember not to stretch out on waking or they will unceremoniously crash to the floor.
Cain: Just because a stranger's car door is open does not mean the car's suprised owner wanted one hundred and sixty pounds of Irish Wolfhound in the backseat, on their shopping.


Arthur: Once when I was a little puppy, gee it seems so long ago, my human had this idea that we would get some "training." Well, as far I can rememmber a bunch of us got together and were having fun. My human said we were "a hooligan bunch," whatever that is. We had found the fish pond and we were pretending that we were retrievers, splashing and running through it. Then I saw a very dangerous thing: I pulled it out at once and brought it to my human. She was funny, she laughted and said it was a "potted water lily," and she put it back in the pond. You just can't tell about humans some times.

Fionna: This is worth a section of its own. It was contributed by Irish and Inge. Although it is quite good I feel in my heart that the list is not complete, so send me your additions.
P.S. Don't let the human types see it lest they figure us out.

Special RULES for CHRISTMAS
(Contributed by the Hounds of Chris Drew)


HOLIDAY ETIQUETTE FOR DOGS
1. Be especially patient with your humans during this time. They may
appear to be more stressed-out than usual and they will appreciate
long comforting dog leans.

2. They may come home with large bags of things they call gifts. Do not
assume that all the gifts are yours.

3. Be tolerant if your humans put decorations on you. They seem to get
some special kind of pleasure out of seeing how you look with fake
antlers.

4. They may bring a large tree into the house and set it up in a
prominent place and cover it with lights and decorations. Bizarre as
this may seem to you, it is an important ritual for your humans, so
there are some things you need to know:
-don't pee on the tree -
-don't drink water in the container that holds the tree -
-mind your tail when you are near the tree -
-if there are packages under the tree, even ones that smell
interesting or that have your name on them, don't rip them open
-don't chew on the cord that runs from the funny-looking hole in the
wall to the tree

5. Your humans may occasionally invite lots of strangers to come
visit during this season. These parties can be lots of fun, but they
also call for some discretion on your part:
- -not all strangers appreciate kisses and leans
- -don't eat off the buffet table
- -beg for goodies subtly
- -be pleasant, even if unknowing strangers sit on your sofa
- -don't drink out of glasses that are left within your reach.

6. Likewise, your humans may take you visiting. Here your manners
will also be important:
- -observe all the rules in #4 for trees that may be in other
people's houses. (4a is particularly important)
- -respect the territory of other animals that may live in the house
- -LOVE the children
- -turn on your charm big time

7. A big man with a white beard and a very loud laugh may emerge
from your fireplace in the middle of the night. DON'T BITE HIM!!

And, as an addition for the IW's who apparently don't understand
the meaning of the word greet -
- - don't greet all the elderly visitors with a good time goose to
the private parts.

If there is more than one IW in the family don't team up for
simultaneous gooses on visitors no matter how tempting and
friendly it seems. Humans do NOT greet each other this way and
do not understand that a good sniff in the private parts is not
a friendly way of saying "howdy, who are you?"

And finally, if you have succumbed to a good time goose, do not make
faces, sneeze or paw at your nose afterwards. Humans have a
custom of anointing themselves with perfumes and talcum powders,
etc. Humans do not appreciate your candor in expressing
your reaction to a good whiff. No one told you to go there to sniff.